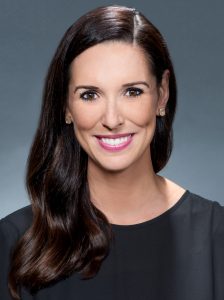 “Cracker Barrel is an iconic brand with a rich history,” Straessle said. “The company has countless stories – so many of them yet to be told – and that was very attractive to me as a communicator and storyteller.”

“UA’s public relations program is truly one of the best, and its master’s program is even better. Coming out of graduate school, I felt well prepared to join the workforce,” Straessle said. “To this day, I encourage undergraduate public relations students to pursue graduate degrees. It’s helped differentiate me from my peers, and I’m forever grateful for the experience.”

Straessle attributes a large portion of her success to the instructors at UA who served as mentors and leaders.

“Susan Daria and Mike Little gave me a great crash course on graphic design and Adobe Creative Suite, which proved to be a tremendously handy skill early in my career,” Straessle said. “Once in graduate school, Bruce Berger became my mentor…and I learned a great deal from him. Joseph Phelps and Meg Lamme were also great leaders for me during that time.”

“One of the wonderful things about public relations is that if successful, you see a tangible output of your work,” Straessle said. “However, public relations is so much more than that. The root of what we do goes beyond media coverage. It’s about reaching people, spreading awareness, and creating brand affinity.”